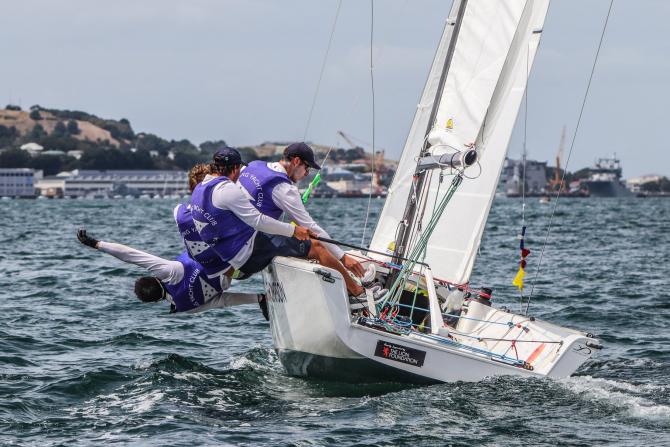 CYCA Youth Match Racing World Champions
James Hodgson and his crew of Harry Hall, Louis Schofield and Nick Rozenauers, have been crowned HARKEN 2020 Youth Match Racing World Champions after defeating American Jack Parkin three-nil in the final.The semi-finals were poised at one a piece when racing got underway on the final day in very light and shifty winds. It was Parkin and Hodgson who struck first, winning near drift off races in which the wind shifted constantly throughout.When racing resumed an hour or so later, it was the regatta come-back-king Jack Parkin who was first to qualify for the final, winning his third match in a row to defeat Finn Tapper (AUS) three-one. Tapper, who qualified in first after the round robin, wasn’t quite on his game today and the resurgent Parkin was an expert in the light conditions. Parkin qualified in seventh, after having to go through a repecharge to make the finals, so to end up in the final was quite a feat.

The second semi-final was much more exciting, with Egnot-Johnson striking back with a hugely dominant win to send the tie into a do-or-die final match which didn’t disappoint. There were plenty of lead changes throughout and it was the New Zealander who rounded the final top mark in front by a whisker. Hodgson didn’t give and after a tit-for-tat downwind leg had his boat in the better position and clean air. The race came right down to the finish, with Egnot-Johnson looking like he may just win it. Hodgson, however, was right there to dip over the line in front of the kiwi and secure a spot in the final.Egnot-Johnson was disappointed not to win and make the final on his home patch.
The final was now set, with Hodgson taking on Parkin to decide the World Championship. The afternoon sea-breeze had picked up which worked in Hodgson’s favour as he had shown he thrives in breezy conditions. Hodgson was great in the pre-starts forcing penalties on Parkin in two of the matches. He was faster around the track too, not letting up and gliding on to win the final without losing a race.Hodgson and his crew were ecstatic, with all of them diving into the water just as they crossed the line for the final time. This is the second year in a row that a CYCA team have won the World Championship. It is also the second year in a row that Hodgson – and his crew mate Harry Hall – have won the title after they crewed for Tom Grimes’s 2019 winning team in Russia. 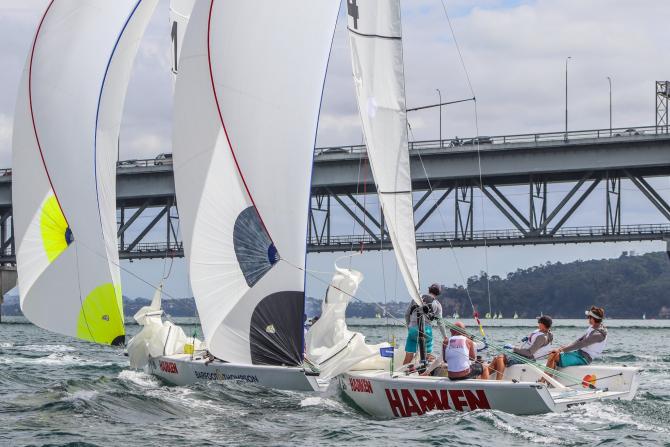