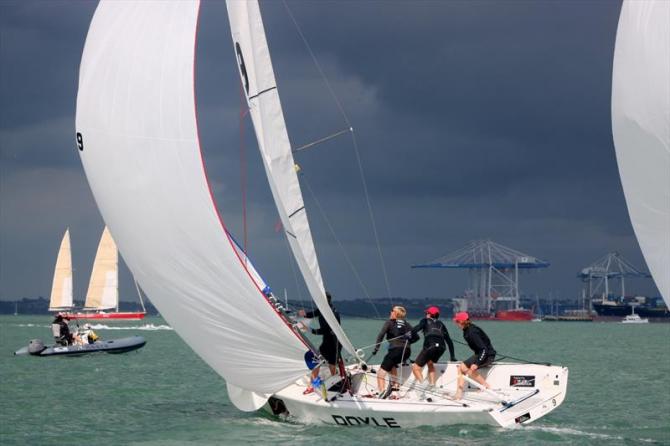 Josh Junior has won his second New Zealand Match Racing crown after beating Chris Steele 3-2 in what was a long tricky day of match racing at the RNZYS. Junior picked Nick to race Egnot-Johnson and his Knots Racing team meaning the second semi-final was between Chris Steele and Leonard Takahashi’s Pacific Racing Team. Both Semi-Finals were quite close the majority of the time, but it was small mistakes from the younger skippers Egnot-Johnson and Takahashi which cost them against their more experienced opponents. Both semis ended three nil.
This put Steele up against Junior in a battle of past champions, with Junior looking to claim his second title and even up the standings with two time champion Steele. In what were very shifty conditions, Steele took the first match quite convincingly and it looked like the final could be over sooner than most watching the drama unfold thought, but Junior then fired back in the next match to tie it up at one a piece.The wind then shifted completely and resulted in a course change, and when racing got back underway it was Junior who took the win and found himself on match point. After yet another course change, Steele came back strong and showed some great tactics in the lighter shifty conditions to even the final to a do or die match to decide the regatta.
The conditions were even harder for the final match, with the wind going home early and forcing our two past champions to an almost drift off in the tide to decide who got to lift the trophy in 2018, and it was Junior who crossed the line first to take home the victory and claim the title of 2018 Yachting Developments New Zealand Match Racing Champion.
Junior was pleased to win again after claiming the title in 2014 – “I’d like to thank the umpires, Harold Bennet and his Race Management team and also Yachting Developments for sponsoring the event. It’s been an awesome regatta. We had some incredibly close racing and to be honest we felt lucky to be racing today after we raced against James yesterday, we probably deserved to get beaten so well done to him and to everyone else involved in the regatta.”