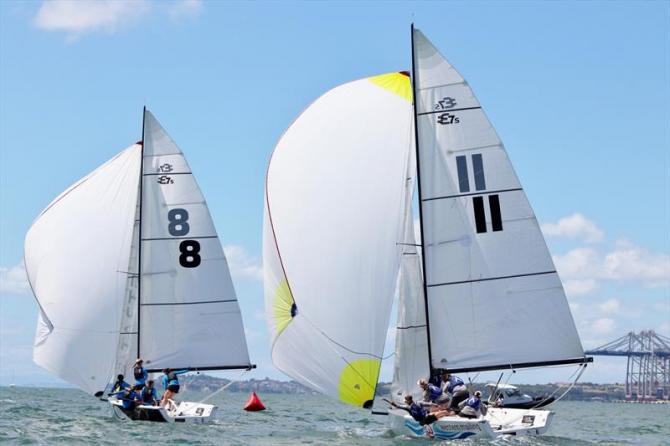 Celia Willison and her RNZYS YTP team have taken out the NZ Women’s Match Racing Championships after four days of intense match racing at the Royal New Zealand Yacht Squadron.
Willison started the day two-nil up against the Royal Prince Alfred Yacht Club, NSW  team, helmed by Juliet Costanzo, but it was the Australian Costanzo who started the day strong by picking up an important victory over her Kiwi opponent, keeping her teams hopes alive. The next match was an absolute beauty and potentially the best of the entire regatta, with plenty of lead changes and close racing ensuring the umpires had plenty of work to do. Willison’s vast experience sailing at the RNZYS shone through in the end though, as she went on to take a tight win and secure her finals berth.
Earlier in the morning, Allison Blecher from the California Yacht Club punched her ticket to the final after defeating two time NZ Women’s Match Racing Champion Susannah Pyatt in what was an impressive display from the Americans, setting up a NZ v USA finale.
The final was then a fairly one sided affair, with Willison and her team outclassing Blecher in the pre starts and sailing fast around the track. Blecher was no match for Willison who went on to win three races on the trot, claiming the Leith Mossman Memorial Trophy and the title of 2019 NZ Women’s Match Racing Champion. Willison was thrilled with her team’s victory –“It feels really good, we’ve been working hard for this and we are so glad we managed to pull it off. We sailed really strongly in the final.. We are just really stoked to come out on top at this event, there were some quality girls out there and winning at home feels amazing.”