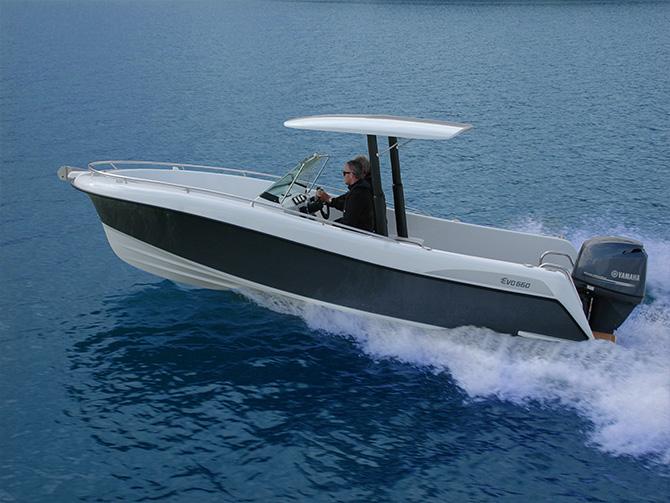 Freddy Foote talks to designer Greg Elliott about the Evo 660.

What happens when a globally renowned Kiwi yacht designer tries his hand at powerboat design? Well, as Freddy Foote found out, he achieves something quite extraordinary. Designed by New Zealand yacht designer, Greg Elliott, the EVO 660 isn’t a new boat to the market. It’s been around for around five years and this is the eighth hull to hit the water, all of the previous seven boats dotted around the country.
Elliott isn’t widely known in power boating circles and he’s the first to admit that. However he has been designing some of the best yacht hulls to leave our shores for about 40-years, so is more than qualified to know a thing or two about simple water dynamics, efficiency and how to get the best from a hull as it glides through the water. “With the yachts, I’ve spent years doing development and research on design and construction, tank testing and modelling to achieve hull designs that not only perform in cruising and racing conditions,” says Elliott. .

“Everyone is New Zealand is obsessed with having a cabin. I just thought it was a bit of wasted space, so I wanted to do something different and create a layout that could lend itself as a true all- rounder.” He wanted to design a boat that wasn’t just about fishing, but one that could serve the water sports enthusiast equally as well. “The main thing I wanted to incorporate was having the full use of the whole boat, not just half of it, so that’s why we went away from a traditional cabin style and made it a centre console, says Elliott.”

The construction of the Elliott EVO 660 is a fibreglass hull and deck, with the inner deck liner built as a single piece. The plugs for the mould were all CNC cut, to ensure precise accuracy during construction. The cockpit is also self-draining, so any water that does find its way on board will quickly disperse.
What is a first for a New Zealand boat, is the adjustable targa top. At the press of a button on the dash, the GRP targa top above lowers down to the height of your choosing or flush with the top of the windshield. It can go from fully lowered to fully extended in around 25 seconds.

The hull design of the EVO 660 is all about efficiency and moderate horsepower. Our test boat was fitted with a Yamaha 115hp four-stroke outboard with a 16” propeller. I’ve never been on a craft that performs the way that the 660 EVO does. First off, when you put the throttle down, it doesn’t drag the hull in the water as it works to get up on the plane like a like of other boats. The 660 transitions seamlessly onto the plane at a very low speed and just 7 knots will see you planning. At 7.0 knots @ 1500rpm, the Yamaha 115hp four-stroke is using just 3.4 lph.  At 12 knots we were sitting at 3000rpm using 10.7 lph and given that we were up on the plane, we were able to maintain brilliant control of the 660 in the harbour at low-speed zone.

While the 660 is easily powered, with the 115hp four-stroke. A 150hp would be the absolute most you would need, mainly because the hull is just so damn efficient. A 90hp would be fine, but I think the 115hp is the perfect engine for the hull. The 115hp engine makes it pretty much foolproof boating. Someone with very little boating experience would easily be able to take this out for a day on the water and be able to master it very quickly.
It’s not too often that something innovative comes along.
The EVO 660 achieves new levels of innovation in not only hull design and efficiency but also functionality and configuration.