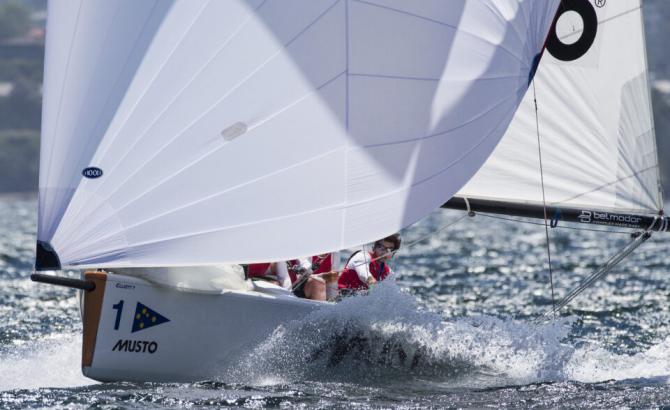 Australia’s final match racing event of the year, the Musto International Youth Match Racing Regatta, will take place in just one week, from Tuesday 26 November to Friday 29 November, hosted by the Cruising Yacht Club of Australia.Twelve international teams from Australia, New Zealand, United States of America, Great Britain and Ireland will contest the four-day event, all vying to etch their name on the ‘Joy Ride’ perpetual trophy.This year’s competition will not doubt be one of the toughest on record, with six competitors inside the Top 25 and only three outside the Top 50 in the World Sailing match racing rankings.
Favourites sailing into the competition must be the kiwis with Nick Egnot-Johnson, ranked 2nd in the World, and fellow kiwi Jordan Stevenson (#12). Both teams will be flying the burgee from Royal New Zealand Yacht Squadron who have been fierce past competitors at the event. Australia’s hopes to recapture the trophy will fall with the Cruising Yacht Club of Australia’s current Youth Match Racing World Champion, Tom Grimes. Grimes will be jumping back on the helm after a 3-month break since his World Championship victory over Egnot-Johnson. Grimes is one of three CYCA teams competing, with James Hodgson, the current Australian Youth Match Racing Champion and runner-up Finn Tapper also competing.
For the first time, teams from Great Britain and Ireland will compete, as both countries prepare for the 2020 Youth Match Racing World Championship, to be held in Auckland, New Zealand on Elliott 7s next year. Matt Whitfield, representing Penarth Yacht Club (GBR) will be spending a lot of time down south as he tries to improve on his 6th place finish at this year’s World Championship. Niall Malone will be a new skipper to the event, representing the Royal Irish Yacht Club (IRL).There will be another strong contingent from California, USA, with David Wood & Jeffrey Petersen, both from Balboa Yacht Club, returning to the competition for a second year. They are joined by fellow American and defending champion, Frankie Dair from California Yacht Club.

This will be the 11th consecutive year that Musto Australasia has supported the event with David Oliver, Chief-Executive Officer commenting “We are delighted to once again be the naming-rights partner for the Musto International Youth Match Racing Regatta.“The regatta will see the world’s best young sailors descend upon the CYCA for a great week of action. It is without doubt the pre-eminent youth match racing event in the world – we can’t wait.”
Racing this year will incorporate Clark Island, allowing spectators to view the racing from the island. A new regatta schedule will also attract more spectators, with racing beginning each day at 1200hrs and racing until approx. 1800hrs each day. Racing can be followed live via the CYCA website and Youth Sailing Academy Facebook page.